Self-Propelled Artillery of the Ukrainian Army. By Ministry of Defense of Ukraine
Advertisement
Draft DeSantis for 2024! [CLICK HERE]

ANALYSIS – Ukraine’s president Volodymyr Zelensky has repeatedly called for heavy weapons such as tanks and artillery, but especially multiple launch rocket systems (MLRS). However, most nations are sending infantry weapons or anti-tank weapons instead.

Ukraine says it needs 60 multiple-launch rocket systems to have a chance at defeating Russia, suggesting the number pledged by the West so far may be inadequate, along with access to sophisticated air defenses to help protect vulnerable citizens from relentless shelling.

Oleksiy Arestovych, an adviser to Ukrainian President Volodymyr Zelensky, told the Guardian that 60 launchers would stop Russian forces “dead in their tracks.” Forty would slow them down with heavy casualties, he said, while 20 would increase Russian casualties but leave the battlefield outcome little changed.

Many Western leaders have pledged to “stand with Ukraine” and announced a significant military and humanitarian aid plan. According to the Ukraine support tracker based at the Kiel Institute for the World Economy, there has been $64.56 billion in government-to-government commitments to Ukraine.

This includes $19 billion in financial aid and $13 billion in humanitarian assistance. However, the most significant contribution of $34 billion is for military aid to Ukraine.

The U.S. is the largest supporter of Ukraine, having committed $25 billion in military aid. The UK, Poland and EU follow with $3 billion, $2 billion and $2 billion, respectively.

Among heavy weapon deliveries, Poland has supplied 240 Soviet-era T-72 battle tanks. The U.S. has delivered more than 200 armored personnel carriers and other vehicles and 90 M777 howitzers.

Norway has supplied 100 Mistral man-portable air-defense systems (MANPADS). In contrast, the U.S has delivered 800 Stinger missiles, with 500 from Germany, 200 from the Netherlands and 160 from the Czech Republic. 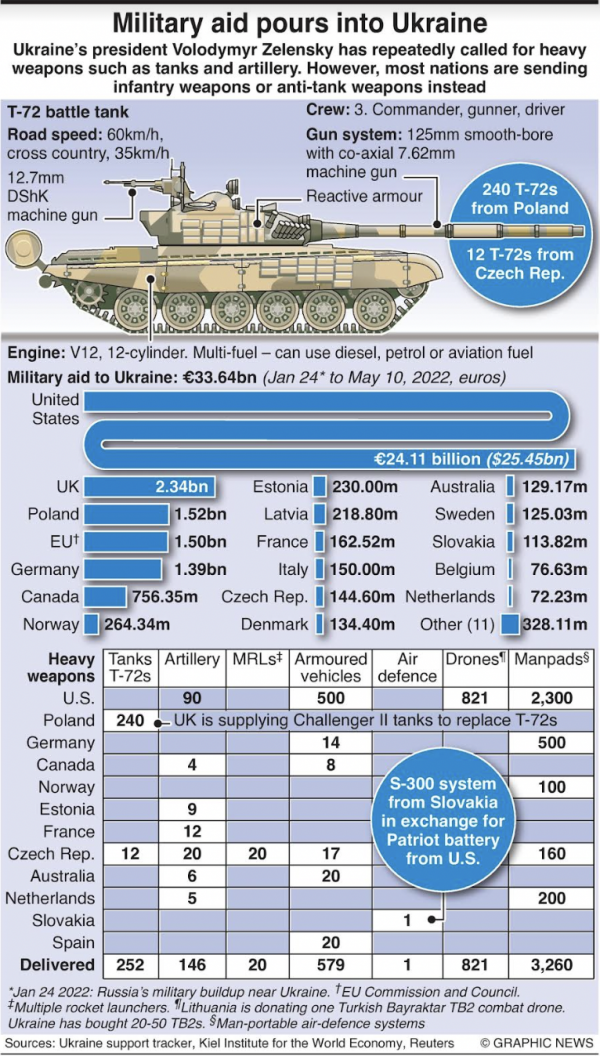 Chancellor Olaf Scholz has now announced that Germany will double its arms aid to Ukraine, which already stands at $2bn. Scholz was recently openly criticized for his hesitant attitude in supplying heavy weapons.

Germany’s Bild newspaper reports what Germany fears most in aiding Ukraine, according to Yahoo News:

“Sources close to the government say there is concern that Ukraine could become overconfident if it experiences a string of battlefield victories and rolls into Russian territory – which would mean that German tanks would once again be inside Russia,” reads the report.

The United States and Britain recently announced plans to provide Kyiv with multiple-launch rocket systems (MLRS), which can hit targets up to 50 miles away. Washington is dispatching four M142 High Mobility Artillery Rocket Systems, known as HIMARS, though Ukrainian troops need at least three weeks of training to use them, the Pentagon said. Britain has confirmed it would send an unspecified number of M270 launch systems to Ukraine.

NATO countries need to do more. Naked aggression against any western country must be defeated or the message to others thinking about it, such as communist China, will be horrible.

Arrests Made in Smuggling Scheme…