No One is Buying Chinese Weapons, And Now Fewer Russian Ones Too

Home /China Threat, Russia Threat/No One is Buying Chinese Weapons, And Now Fewer Russian Ones Too

No One is Buying Chinese Weapons, And Now Fewer Russian Ones Too

The relatively poor performance of Russian forces and weapons in Ukraine have impacted how the world views Russian military hardware, affecting its foreign weapons sales.

But is it having an effect on Chinese weapons too, most of which are Russian made or have origins in Russian designs?

It may be too soon to tell, but except for some smaller but still deadly items like armed drones, and sales to rogue, sanctioned nations like Iran, China’s global arms sales are shrinking, not growing.

Despite China trying, no one seems to be interested in buying the latest Chinese big ticket items like tanks, jet fighters, or submarines.

According to Richard Bitzinger, an international security analyst, writing in The Epoch Times:

The Stockholm International Peace Research Institute (SIPRI) recently released its data on the global arms trade for 2021, and the news for China is not good. Most foreign arms buyers continue to shun Chinese weapons systems.

Beijing’s falling arms sales are due to declines in sales in two of its most critical markets, Africa and Asia. Algeria, Sudan, and Indonesia—at one time buyers of considerable numbers of Chinese armaments—have greatly reduced their weapons purchases from China. So has Venezuela. Only Pakistan, dependent on Beijing for 72 percent of its imported weapons systems, remains a loyal customer.

In fact, even after pouring years of effort (and money) into modernizing its defense industry, China still has very few desirable and competitive weapons systems to offer on the global arms market. Beijing as an arms exporter is basically stuck where it has been for decades, dependent on a few big buyers (particularly Pakistan) or making a handful of one-off arms deals (such as the sale of four corvettes to Malaysia).

Moscow’s arms exports during 2017–2021 were even more concentrated than China’s with only four states—India, China, Egypt, and Algeria together accounting for 73 percent of total Russian arms exports. 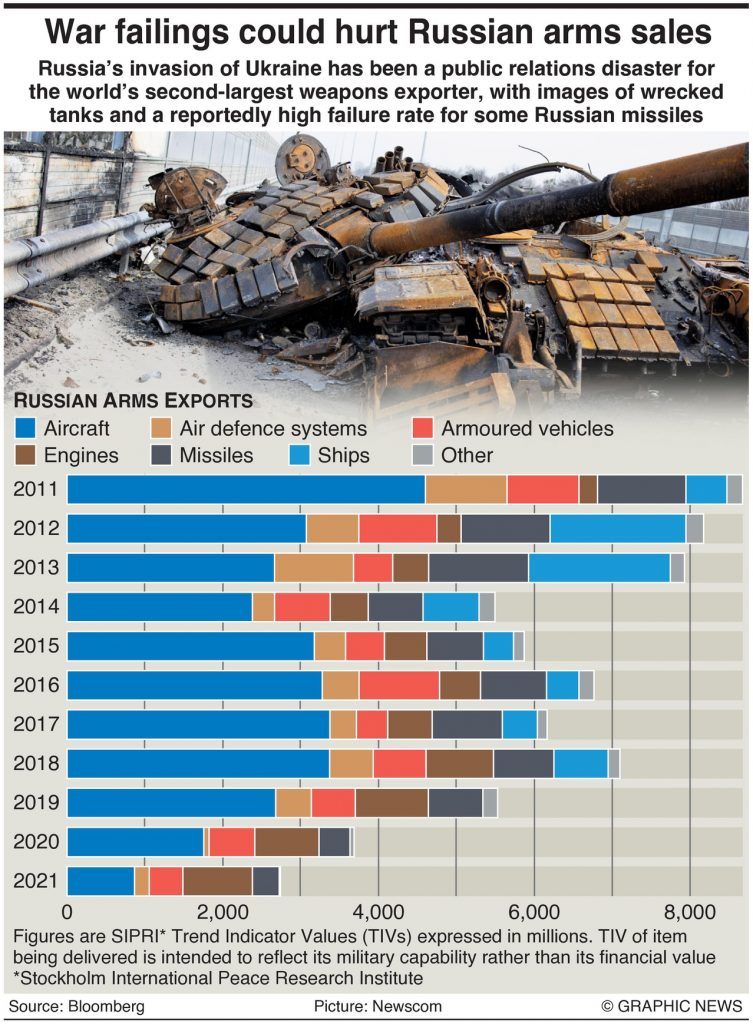 Ant that will likely decline as Russia’s invasion of Ukraine has been a public relations disaster for the world’s second-largest weapons exporter, with high failure rates of precision-guided missiles and the loss of flagship cruiser Moskva.

As Bloomberg reported, add in questions around competitiveness and the supply difficulties that lie ahead – between sanctions and Russia’s urgent need to replace its lost equipment – and the Russian arms export picture is grim.

However as noted earlier, Bitzinger reminds us that:

…China has become a major supplier of armed drones to militaries worldwide. SIPRI found that Beijing has sold armed unmanned aerial vehicles to at least 16 countries in three continents, including Egypt, Indonesia, Iraq, Jordan, Nigeria, Saudi Arabia, Serbia, and the United Arab Emirates (UAE). These sales have been worth more than $700 million.

So Beijing has sold some very dangerous weaponry to some very bad players, but often the dollar figures were too low (or were unknown) to show up on most arms sales registers.

Bottom line – “During the 1990s, China was a significant provider of weaponry to Iran, particularly anti-ship cruise missiles and ballistic missile systems, and  Beijing also supplied nuclear technology to Iran, Pakistan, and North Korea, which fed into their nuclear weapons research.”

However, even as the Chinese military industry has matured and become far more sophisticated, today few buyers seem interested in what China is selling. ADN