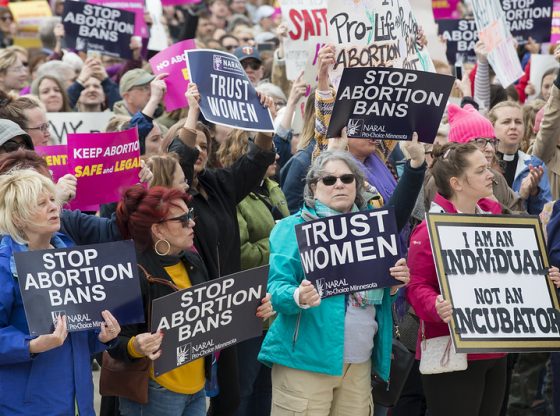 Photo of a Stop Abortion Rally in St. Paul, Minnesota / Photo by Fibonacci Blue via Flickr

ANALYSIS – As I wrote about yesterday, a courageous former Green Beret turned Army Chaplain provoked a backlash from the woke Army when he sent a brigade all-hands email praising the Supreme Court’s decision to overturn Roe v Wade.

First, a couple of woke colonels in the chaplain’s command virtue signaled by complaining about the chaplain’s email, and now the Army is conducting a command inquiry into the chaplains religious missive.

It should tread lightly.

Maj. Brian T. Hargis is a chaplain observer coach/trainer assigned to First Army at Camp Atterbury, Indiana. The training unit, which evaluates other units during training events, is composed of full- and part-time troops from the regular Army, National Guard and Army Reserve.

However, it is reported that he is currently making a permanent change of station move unrelated to the email.

Hargis’ email includes several quotes from the Bible and encouraged troops to “pray for the safety of our Supreme Justices (and families) whose lives are in danger from Satanic-influenced evildoers,” as well as for all states to “follow suit with the SC decisions” and ban abortion. 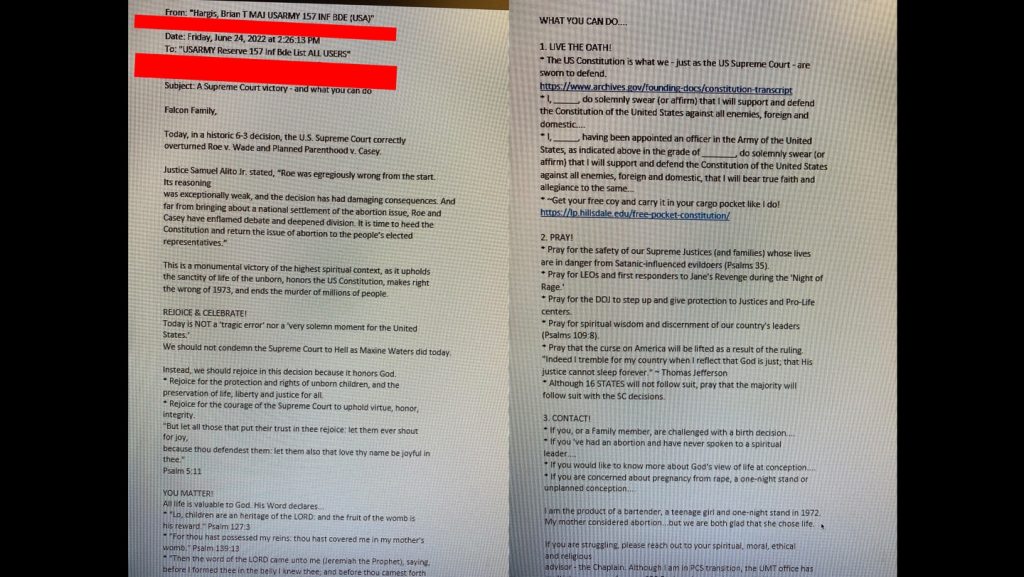 Command spokesperson Steven Harmon told the Army Times in a phone interview that the commander’s inquiry is reviewing “propriety and legality of that all-users message and the dissemination of such.”

However, even the Air Force’s most recent 2019 woke legal opinion about what chaplains can or cannot say in public prayers at optional event makes no mention of abortion.

It does restrictively hold that “any prayer or invocation offered must not denigrate, proselytize, or betray an impermissible government purpose…[and] the chaplain could not express the views of his or her faith on topics such as homosexuality, transgenderism, or nonreligious personnel.”

The Army Times notes that:

Although chaplains are required to be credentialed leaders in their respective faiths, they occupy a tenuous gray area between the need to provide soldiers the religious support to which they’re entitled and the First Amendment’s restrictions on government officials advancing their personal religious beliefs in an official capacity.

Sadly, the reporter at the Army Times has never read the Constitution, because the 1st Amendment protects Americans’ right to free speech and free exercise of religion, not restrict it:

Congress shall make no law respecting an establishment of religion, or prohibiting the free exercise thereof; or abridging the freedom of speech, or of the press; or the right of the people peaceably to assemble, and to petition the Government for a redress of grievances.

The egregious idea conflating anyone at any level of government, including chaplains and teachers, expressing their religious views with a “law respecting the establishment of religion” — while ignoring the clause about not “prohibiting the free exercise thereof” — has been the unconstitutional view that has often turned the 1st amendment into a sham.

It is bad enough that a spiritual leader in the military today cannot express his faith’s beliefs on topics such as homosexuality or the scientifically unfounded latest woke trend of ‘transgenderism,’ but not being able to opine on abortion would be an even greater violation of a chaplain’s oath and duty, not to mention his 1st amendment right to express his religion.

We need more courageous officers like Major Hargis, and less PC cowards. Hargis’ command would be wise to not be too woke in its findings. ADN

TUESDAY PDB – Biden’s Border Crisis Kills 46, US Stealth Fighters in the Western Pacific to Face China, Russian Tactical Nukes in Belarus? Register Women for the Draft, Woke Army Missing Recruitment Goals
Biden-Harris are 100% to Blame for 50+ Dead Migrants in Texas – And Many More