ANALYSIS – Even a broken clock is right twice a day. There is virtually nothing I would ever applaud Nancy Pelosi for doing. On the contrary, I consider the radical speaker one of the greatest dangers to the Republic.

But today I will applaud her for her apparent decision to defy Communist China’s threats and bullying, as well as concerns expressed from the always meek Team Biden, and visit our besieged island ally – Taiwan.

Of course the Speaker’s Asia tour could also be a distraction from her husband’s apparent insider trades worth up to $5 million on semiconductor stocks ahead of a critical Congressional vote to give massive subsidies to the industry.

While there is no mention of Taiwan on her official tour of Asia itinerary, CNN reports that according to a senior Taiwanese government official and a US official, she will indeed visit.

But give her credit nonetheless.

The Taiwanese official added that she is expected to stay in Taiwan overnight.

Reports from TVBS News in Taiwan have said Pelosi could arrive in Taipei as early as tomorrow night and her team has booked two hotels.

And the Pentagon is preparing for any possible Chinese response.

Since Pelosi is third in the presidential line of succession, the Pentagon must take extra precautions for her security when she travels overseas.

And a potential crisis is looming.

On Monday the People’s Liberation Army’s (PLA’s) Eastern Theater Command said in a message posted on China’s social media app Weibo that it would “bury incoming enemies” with a video showing off its weaponry and fighting tactics.

“Firmly stand by and ready for the fighting command; Bury all incoming enemies,” it said.

This followed warnings from China’s Foreign Ministry of the “egregious political impact” of Pelosi’s planned visit to the self-governing island that China claims as a part of its territory.

The Foreign Ministry added that its military “won’t sit by idly” if Beijing feels its “sovereignty and territorial integrity” is being threatened.

Last Friday, Chinese state media tweeted the government was prepared to shoot Pelosi’s plane down if it was detected in its airspace accompanied by a fighter jet escort. The Tweet was removed by Twitter. 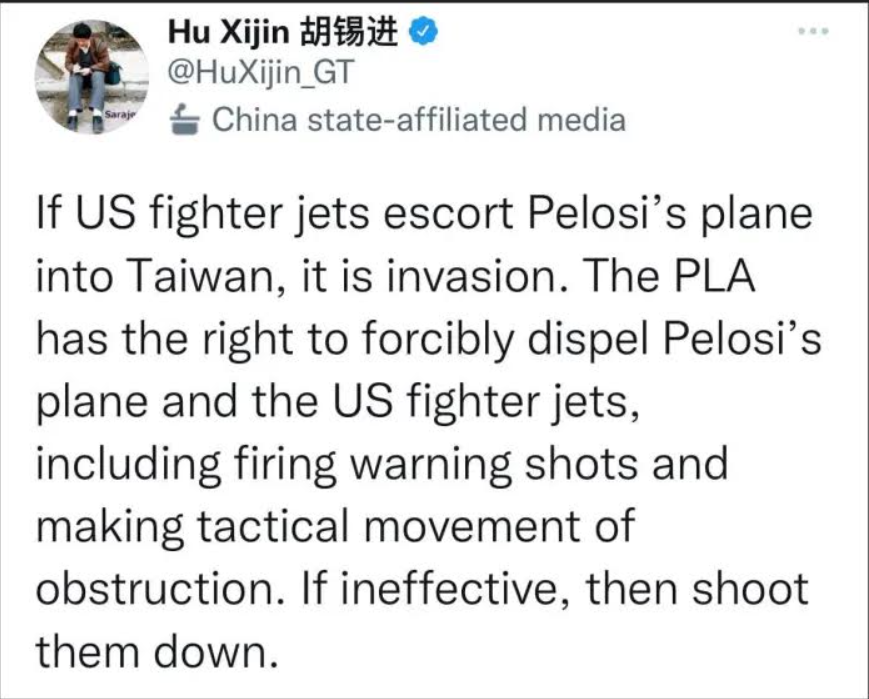 The speaker’s first stop was in Hawaii, then on to Guam landing at Anderson Air Force Base before arriving in Singapore on Monday morning.

Pelosi tweeted a photo of her with the Marine Embassy Security Detachment in Singapore.

One of our delegation’s first stops in Singapore was to greet our U.S. Marine Detachment at @RedWhiteBlueDot.

It was our honor to bring the gratitude of the Congress to our patriots in uniform selflessly serving our nation overseas. pic.twitter.com/mIU93buIjE

CBS News reported that U.S. officials told AP that if Pelosi goes to Taiwan, “the military would increase its movement of forces and assets in the Indo-Pacific region. They declined to provide details, but said that fighter jets, ships, surveillance assets and other military systems would likely be used to provide overlapping rings of protection for her flight to Taiwan and any time on the ground there.”

If Pelosi does visit the island, it will be the highest-level official U.S. visit since former Speaker Newt Gingrich visited Taiwan in 1997. ADN