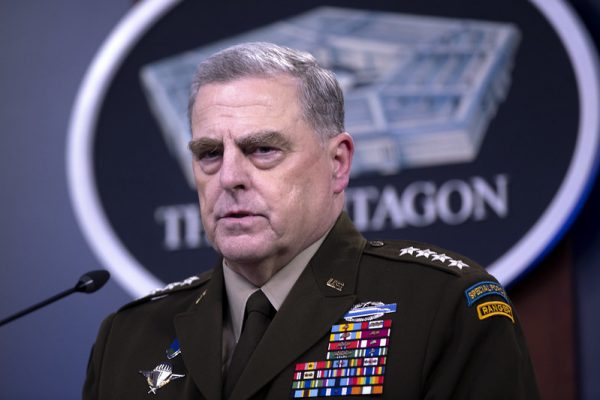 ANALYSIS – During his tenure under President Trump, Chairman of the Joint chiefs Mark Milley angered a lot of people, including me. His comments about understanding ‘white rage’ related to the Jan. 6 riot, and Critical Race Theory (CRT) indoctrination at the Pentagon were some of the dumbest things I’ve ever heard from a JCS Chairman.

But sticking to the area of civil military relations, an excerpt in the New Yorker from the new book by Susan Glasser and Peter Baker, ‘Inside the War Between Trump and His Generals,’ How Mark Milley and others in the Pentagon handled the national-security threat posed by their own Commander-in-Chief, tries to paint Milley, and several other generals, as a heroes fighting an erratic and dangerous president.

What many political military experts see though is a man who often came dangerously close to usurping the role of president.

While I may agree with some of the issues that Milley and the other generals tried to fight Trump on, like leaving Syria, withholding aid from Ukraine, withdrawing from Afghanistan, and several others, the Constitution doesn’t give Milley, or any other general, the right to undermine or veto lawful presidential orders.

The question of where these conniving generals were when President Biden recklessly withdrew from Afghanistan, and committed other egregious blunders, is also one to ponder.

The Glasser/Baker excerpt shows a [JCS] chair working internally against Trump’s desires, namely to withdraw troops from Germany, send active-duty soldiers to quash domestic protests and counter Iran. But even if Milley deemed those orders awful, he must obey them as long as they were lawful.

If he doesn’t, “the military becomes an arbiter of the political fate of the country and that’s undemocratic and inappropriate,” said LINDSAY COHN, a civil-military relations expert at the U.S. Naval War College (speaking for herself as an academic and not the institution or Navy).

The American Enterprise Institute’s KORI SCHAKE said she plans to teach the article in class: “The exam question will be for students to identify the number of civil-military norms violated by Gen. Milley in the course of this story.”

The book excerpt also rehashes Milley’s decision to follow Trump to Lafayette Square on June 1, the morning after the violent and fiery BLM rioting across from the White House that I personally witnessed the night before.

The New Yorker of course downplays the BLM riot.

Milley reportedly was so vexed by his decision to join Trump that morning, among many other things, that he drafted a resignation letter.

I regret to inform you that I intend to resign as your Chairman of the Joint Chiefs of Staff. Thank you for the honor of appointing me as senior ranking officer. The events of the last couple weeks have caused me to do deep soul-searching, and I can no longer faithfully support and execute your orders as Chairman of the Joint Chiefs of Staff. It is my belief that you were doing great and irreparable harm to my country. I believe that you have made a concerted effort over time to politicize the United States military. I thought that I could change that. I’ve come to the realization that I cannot, and I need to step aside and let someone else try to do that.

Had he resigned, I would have had far more respect for him.

However, according to the excerpt, former Secretary of Defense and C.I.A. chief, told Milley: “Make them fire you. Don’t resign.” The article continues:

Milley had finally come to a decision. He would not quit. “Fuck that shit,” he told his staff. “I’ll just fight him.” The challenge, as he saw it, was to stop Trump from doing any more damage, while also acting in a way that was consistent with his obligation to carry out the orders of his Commander-in-Chief… “If they want to court-martial me, or put me in prison, have at it,” Milley told his staff. “But I will fight from the inside.”

This is what causes the most concern. Since when is it anyone working for the President of the United State’s job, much less the Chairman of the Joint Chiefs of Staff, to fight him from the inside?

“I think reasonable people can disagree on whether he made the right choices,” Cohen said of Milley, “but I also think it’s important for all of us to ask ourselves where exactly we think that line is.”

This is a key question for the future, and one that not many of our leaders seem to be considering. In my book Milley crossed the line under Trump.

My question is, did he set a precedent? ADN