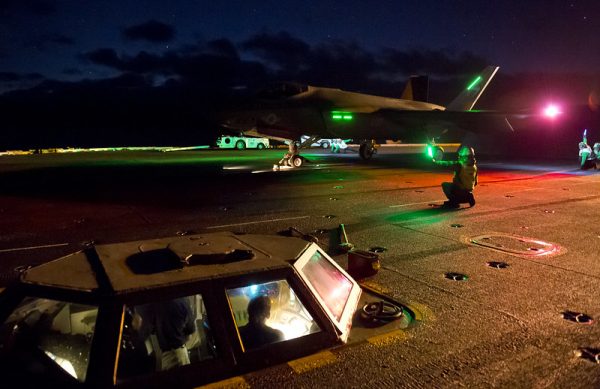 Another U.S. military stealth jet has been spotted wearing a metallic-looking coating, according to The Drive.  A U.S. Navy F-35C Joint Strike Fighter was caught sporting a mosaic of panels with mirror-like finishes.

This is different from another ‘chrome’ coating previously seen on one of the service’s F-35Cs, but is very similar to one that has been observed on a U.S. Air Force F-22 Raptor in the recent past.

The jet in question belongs to the Navy’s Air Test and Evaluation Squadron Nine (VX-9), the “Vampires,” and has the Bureau Number serial number 168842. The aircraft – seen in the pictures at the top of this story and below taken by Fred Taleghani of FreddyB Aviation Photography, who goes by the handle @cvvhrn Twitter – has been flying from Naval Base Ventura County (NBVC) Point Mugu in California since at least last week.

The aircraft also has the modex number 105, which is painted on the outside of both of its twin tails, along with the VX-9 tail code XE. A subdued variation of the VX-9 logo, consisting of a bat and twin lightning bolt motif with four stars arrayed above, is also seen on the outside of the left tail.

The markings are, of course, much less interesting than the mosaic of rhombus, triangle, and square-shaped tiles arrayed around the airframe. This is distinct from the pattern seen on the F-22 with the mirror-like finish that emerged last year, which featured a mix of square, trapezoidal, and somewhat triangular-shaped panels, as you can find out more about here.

A second “chrome” Raptor appeared in March with a different more triangular tile array. The report notes that this is more common with the F-35C than the Raptor mirror-like coating.