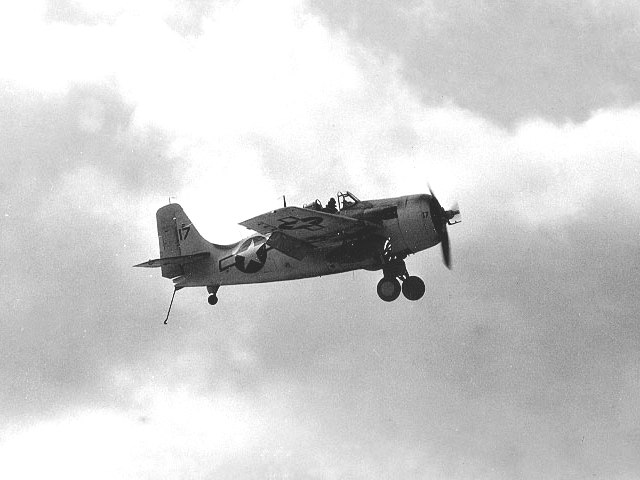 A U.S. Navy General Motors FM-2 Wildcat fighter flies near the escort carrier USS Core (CVE-13), during operations in the North Atlantic, 12 April 1944. The plane has its landing gear and tailhook down, in preparation for landing on board. Via Wikimedia Commons.
Tweet
Share
Email

Following a shocking and fatal plane crash at a Saturday air show in Dallas of two World War II-era planes, one a fighter plane and one a bomber, an investigation is being opened. The crash left six people dead. Investigators seek to find why the aircraft were seemingly sharing the same airspace when they collided with each other.

“One of the things we would probably most likely be trying to determine is why those aircraft were co-altitude in the same air space at the same time,” Michael Graham, a member of the National Transportation Safety Board, said at a news conference.

The crash came three years after the crash of a bomber in Connecticut that killed seven, and amid ongoing concern about the safety of air shows involving older warplanes. The company that owned the planes flying in the Wings Over Dallas show has had other crashes in its more than 60-year history.

The crash claimed six lives, Dallas County Judge Clay Jenkins tweeted Sunday, citing the county medical examiner. Authorities are continuing work to identify the victims, he said. Dallas Fire-Rescue said there were no reports of injuries on the ground.

Armin Mizani, the mayor of Keller, Texas, said Terry Barker, a retired pilot who lived in Keller, was in the B-17 bomber that crashed. Mizani said he learned of Barker’s death from his family.

Officials said that the Federal Aviation Administration (FAA) would also open an investigation. The planes and the scene where the crash happened will be heavily scrunitized and picked apart to ensure no details were missed.