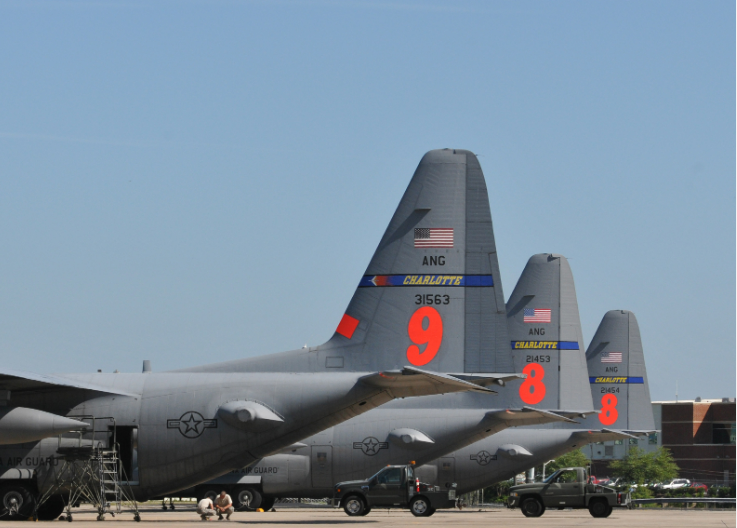 For this mission, the North Carolina Air National Guard members worked with medical teams from across the world. These other teams came from Ramstein, Andrews, Dover and Scott Air Force bases. They also came from Brooke Army Medical Center and Joint Base San Antonio, Texas.

“Brace for landing” echoed through the cabin of a C-17 Globemaster III aircraft descending into Germany Dec. 25 as members of the 156th Airlift Squadron and Brooke Army Medical Center rushed to the aid of a baby suffering a low heart rate and oxygen saturation.

“We were originally tasked for this mission because the NCANG has the aeromedical evacuation channel right now, where we send crews out to do medical evacuation missions, and our channel runs about four months,” said U.S. Air Force pilot Capt. Barry Plemmons, 156th Airlift Squadron, North Carolina Air National Guard.

The channel rotates among units across the globe providing humanitarian missions by Air Force and affiliated military services.

“The particulars of this mission are rare with a neonatal patient. With that said though, the patient movement is something close to my heart and a favorite mission we do,” Plemmons said. “What we do is take someone that is physically or mentally wounded from a place they shouldn’t be to a better standard of care and get them the help and treatment they need.”
We picked up the baby Christmas Day in Kuwait and delivered her to Germany in the same day,” said Tech. Sgt. Alejandro Armendariz, 145th Aircraft Maintenance Squadron, the crew chief.

The mission coincided with severe cold weather, snow and ice.

“The day we left, it was the big storm that came through, and at the time of deicing, it was minus 5 degrees with windchill,” said Armendariz. “I was outside for nearly four hours deicing and refueling the aircraft. There was a point I couldn’t feel my fingers or cheeks, but it was well worth it to put my body through that to get the baby to a hospital.”

During the journey to get to the infant, the crew resolved numerous challenges.

“We faced a lot of adversity throughout our mission, and this crew was the only reason we were able to get the baby out of Kuwait and into Germany,” said U.S. Army Maj. Jeanne Krick, Brooke Army Medical Center doctor.

Krick said once the baby was on board, members of the air evacuation crew had to troubleshoot an equipment malunction and communicate with personnel on the ground in Germany to get equipment to continue the mission.

During the descent into Germany, the team had to unbuckle and respond because the infant’s vital signs dropped precipitously.

“Members of the AE (air evacuation) crew rushed to help brace us in place for landing while the pilots did everything they could to ensure a quick and safe landing,“ Krick said. “As soon as we landed, members of the crew ran to the back of the aircraft to get the ramp dropped as quickly as possible while the pilots communicated with ground crew to get EMS on board as quickly as possible.

“We were able to intervene as needed and bring the baby’s vital signs back to normal ranges. As of now, she’s actually been weened down on her respiratory needs; she’s doing really well.”

Despite the challenges, the mission was completed.

The Miles
There were more than 15,000 miles traveled in this short amount of time. It was an exhausting mission that left a big mark on the hearts of the men and women who saved the baby. Humanitarian missions that save an infants life are the missions that one never forgets.