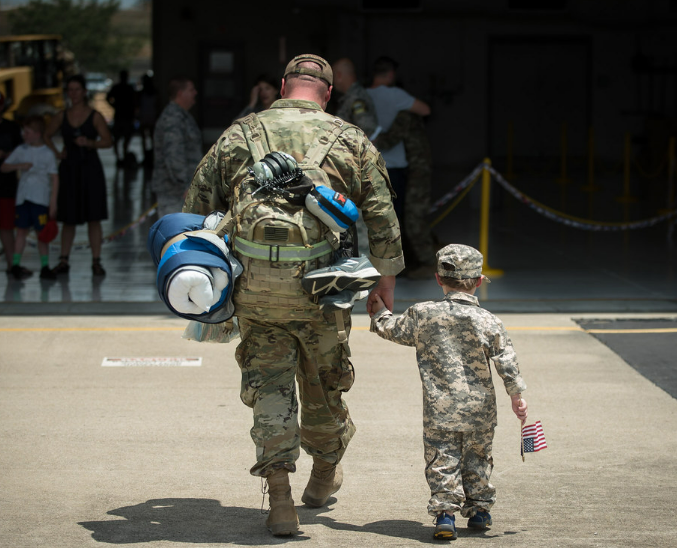 Only the U.S. Air Force and Space Force have implemented the new policy allowing for 12 weeks of parental leave.

The Policy
American Defense News reported on this new policy a week ago when it was imptemented.
“This change in policy to allow dads to take 12 weeks off when a baby is born/adopted/placed into their family is a change for the better. When the military takes care of their service members and their families, then the service members are better prepared to serve their country. This positive change is long overdue, but welcome.”

The Implementation
The U.S. Air Force and Space Force have quickly implemented the new policy. But the Navy, Army, and Marine Corps are still figuring out how to implement the policy which is leaving many service members in limbo.

The Army’s Statement
“Soldiers cannot exercise authorizations in [the DoD directive] until [Army headquarters] publishes Army policy with appropriately detailed request processes,” according to a service-wide message released earlier this week. “The Army’s implementation guidance is being finalized and we expect it to be published in the near future,” Army spokeswoman Madison Bonzo told Military Times on Wednesday. “Eligible Soldiers may continue to request leave under the previous Parenthood, Pregnancy, and Post-partum policy and when the new policy is published, they may extend their leave accordingly.”

The Marine Corps and Navy’s Statement
“Upon receipt of the Department of Navy policy, the Marine Corps will finalize and publish implementing guidance via a Marine Corps Bulletin and Marine Administrative Message, to be followed by incorporation of changes to applicable Marine Corps Orders,” spokesman Maj. Jordan Cochran said Tuesday.